The OER Hub team prepare for launch July marked the end of the initial phase of the OER Research Hub. It’s been a great three years, and Beck has pulled out some of the highlights. But what next, you are all … END_OF_DOCUMENT_TOKEN_TO_BE_REPLACED

<Image by SPUR https://flic.kr/p/fb6bDM> Reuse of OERs is an elusive, even mythical creature, so much so that Alan Levine has compared finding it to tracking Bigfoot. David Wiley has spoken of ‘dark reuse‘, like dark matter, we assume it’s going on … END_OF_DOCUMENT_TOKEN_TO_BE_REPLACED

(reblogged from Martin’s blog) I’m pretty sure I’m the first person to ever use the iceberg analogy… I’ve been pondering ways of thinking about open education awareness, and OER usage that might help shape OER policy. So here’s one I … END_OF_DOCUMENT_TOKEN_TO_BE_REPLACED 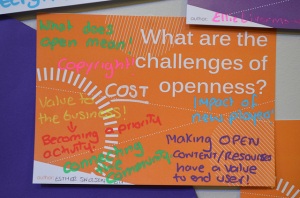 In my Battle for Open book (and article) I make the claim that openness has been victorious in many respects, and reinforce this by examining the success of open access publishing, OERs, MOOCs and open scholarship. However, to many working in higher education, this would seem a rather overblown claim. They may work in contexts where open scholarship is not only not recognised but actively discouraged, where the mention of OERs would be met with blank expressions and any proposed change to take advantage of the opportunities of open education is actively resisted. Any notion that openness has won seems like the fancy of a privileged few, perhaps operating within an open education bubble.

I have sympathy with this view, so wanted to explore what was meant by my claim. I think we can point to many examples that demonstrate the success of the open approach: the open access mandates; the numbers of learners and media interest in MOOCs; the impact and sustainability of open textbooks; the changing nature of fundamental scholarly practice as a result of open approaches.

To suggest that openness has been successful though is not to claim that it has achieved saturation or 100% uptake. Rather that all of these separate successes point to a larger trend – this is the moment when openness has moved from being a peripheral, specialist interest to a mainstream approach. To use that oft-quoted (and perhaps meaningless) term, it is at a tipping point. From this moment the application of open approaches in all aspects of higher education practice has both legitimacy and a certain inevitably. This is not to say that it will always be adopted, just as the open source approach to software is not always pursued, but it is an increasingly pervasive method. The speed of acceptance will be influenced by a number of factors such as disciplinary cultures, national programmes, policies, funding, the presence of champions and immediate benefits.

The victory of open education then is that it is now a serious contender proposed by more than just its devoted acolytes, as a method for any number of higher education initiatives, be they in research, teaching or public engagement. And this transition is at the heart of my book, since inherent in it are opportunities and challenges, just as a small start-up business must face a whole different set of issues when it grows and becomes a larger multi-national corporation. In this transition there are many potential pitfalls – the whole enterprise can fail, it can be taken over by others, or the fundamental value and identity that characterised that embryonic stage can be lost.

Alan Levine came to visit, and I grabbed a quick video (rather shakily done) of him talking about openness. If you haven’t seen them then Alan’s sites 50 ways to tell a story and True stories of openness are great resources.

We suspect that most people who come to this site know what OERs are, but in case you don’t we’ve created a YouTube playlist that sequences 10 videos together explaining OERs and related issues.

YouTube playlists also allow you to add notes to each one (although limited in characters and only visible when you view the videos on the YouTube site). This makes it possible to view a playlist as a sort of mini-course. The 10 videos take you from a general introduction, then look at some of the context, provide some examples and ends with a lecture on issues around openness. By the end of it the viewer will hopefully have a pretty good appreciation of what OERs are, how they are being used, and what some of the main issues are.

1. The OERs – Open Educational Resources by intheacademia
A simple introduction to the concept of OERs

2. TEDxNYED – David Wiley – 03/06/10 by TEDxTalks
Going a bit deeper now, one of the leading educators in the OER movement sets out the rationale for open education

3. Everything Is A Remix by StarveTheSystem2
This sets the culture within which OERs operate, where remixing is a part of society

4. Creative Commons licences explained by Chris Follows
Following on from the previous video, the various types of CC license are explained here (a New Zealand context is used, but it is applicable widely)

5. The impact of OpenStax College on higher education by CLEARincNYC
Open Textbooks are a very practical example of OERs & here the benefits are set out

6. Future Learning: Richard Baraniuk by GOOD
Connexions were one of the first OER repositories & the director explains the concept here

7. Black Holes – 60 Second Adventures in Astronomy (12/14) by OUlearn
This is included as an example of an OER – a short videofrom the OU explaining black holes

8. The OER COUP by David Wiley
David Wiley gives a presentation on some OER research and a model for looking at impact

9. Bridge to Success: Why Open Educational Resources Matter by olnetchannel
An example of an OER project in a practical setting, Bridge2Success worked with community colleges in the US

10. Open Ed 12 – Gardner Campbell Keynote – Ecologies of Yearning by OpenEdConference12
A long, & thoughtful analysis on why the early promise of openness may not be turning out as envisaged

<Image http://www.flickr.com/photos/myklroventine/3448372653/> This post reblogged from: http://nogoodreason.typepad.co.uk/no_good_reason/2013/09/futurelearn-the-role-of-moocs.html If you’re working in higher ed in the UK you will no doubt have seen that FutureLearn had its beta launch last week. Some disclosure – FutureLearn is owned by the OU & I’ve been … END_OF_DOCUMENT_TOKEN_TO_BE_REPLACED

I was at the OCWC Conference in Bali last week, representing the OER Research Hub. For reasons too tedious to mention this was actually my first OCWC conference. Most conferences are a mixture of plusses and minuses so here are … END_OF_DOCUMENT_TOKEN_TO_BE_REPLACED

Except where otherwise noted, content on this site is licensed under a Creative Commons Attribution 4.0 International License.